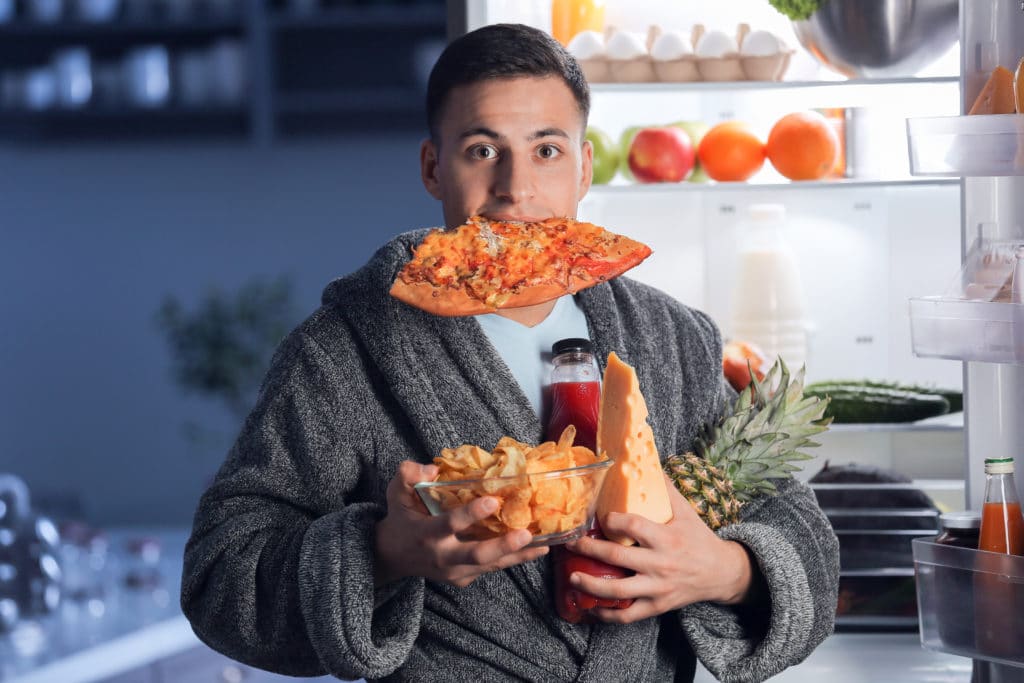 With no shortage of anxiety nowadays, cannabis sales are surging. Clearly many of us are turning to cannabis to calm the quarantine blues. It’s not a surprise either that with the extra time spent at home, we’re beginning to ask more questions about cannabis than ever before. These conversations are carried into the workplace, especially at a dispensary. Recently, one of my esteemed colleagues confided in me that he ate a whole bag of chocolate chips at three in the morning, in the dark, as they melted into the palm of his hand. It’s not surprising, as most of us have been confronted with the demon of insatiable hunger after a night of consuming THC. This, my friends, is also known as the munchies.

When you consume THC a physiological process starts where THC begins binding to the CB1 receptors. This begins to affect your body’s physiology in a few different ways. THC continues binding to receptors located on nerve terminals that make synaptic connections to POMC neurons, among others [2]. This then begins to affect the neurons responsible for inhibiting appetite [2]. It was observed that when it binds to the CB1 receptor it stimulates the release of an appetite-stimulating neuropeptide, beta-endorphin, while also not releasing a peptide that can suppress appetite that’s located in the same neuron [2].

Typically, these neurons help suppress cravings, but now they’re amplified [2]. THC can also promote the release of “ghrelin”, a hormone that has appetite-stimulating or, orexigenic, properties and is referred to as “the hunger hormone”[3]. When we get hungry our bodies are in a physiological condition that lets us know that we need to find and consume food [1]. Researchers have also found that our brain plays a huge role in why food tastes so much better after a bowl/brownie which coupled with the ghrelin release makes the increase in appetite feel so extreme.

In a  2014 research paper published in Nature Neuroscience, the study points out that during this same binding process to receptors in the brain’s olfactory bulb increases the taste and smell of food [1] The article stated that researchers “found that CB1 receptor signaling in the olfactory bulb increases odor detection and proportionally promotes food intake, thereby linking hunger, olfaction and food intake”[1]. Simply, cannabis makes food taste better. All this creates a perfect storm of hunger, which leads us to eat when we otherwise may not have. This within itself is providing people that suffer from HIV, cancer, anorexia, and a myriad of other diseases that reduce appetite in patients. 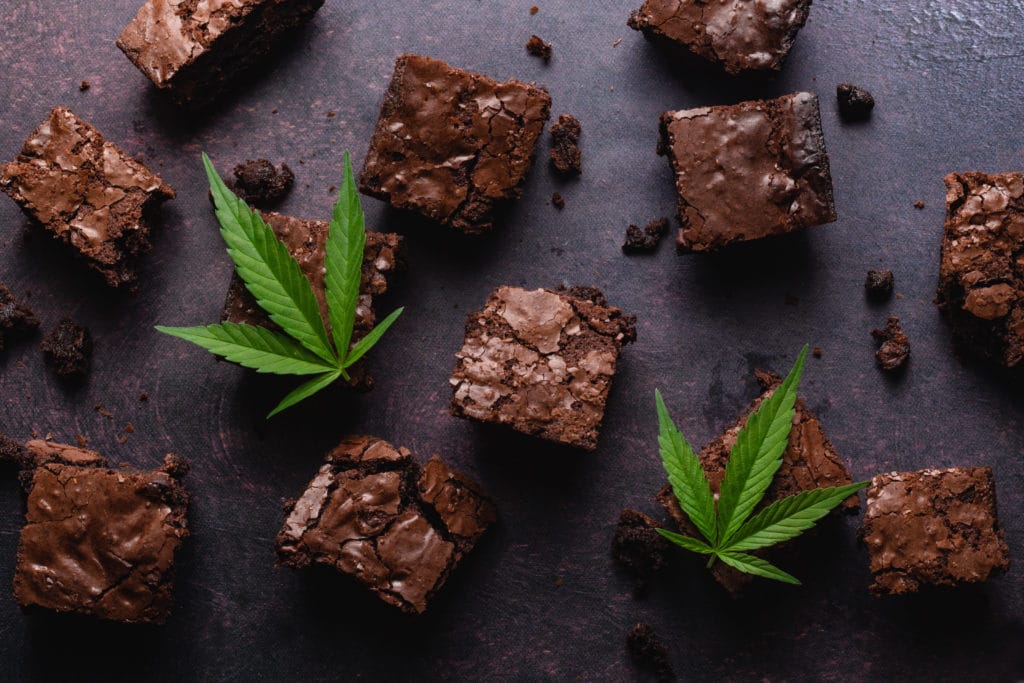 In 1981 a San Francisco woman named Ruth “Brownie Mary” Rathbun was arrested for selling her famous, you guessed it, “pot brownies”. Her sentence was community service, which she spent helping people sick with the virus HIV.  She developed a family there and was giving away an estimated 1.600 brownies to AIDS patients. A decade later, Brownie Mary, alongside other activists would begin to fight for the legalization of cannabis, which eventually led to the first medical cannabis program.

Cannabis can assist in more ways than just stimulating appetite, including pain relief. In a 2011 study titled A Pilot Study of the Effects of Cannabis on Appetite Hormones in HIV-infected Adult Men. This study shows promise for utilizing cannabis to treat symptoms beyond inducing hunger. Cannabis also provided an analgesic response in patients with pain related to HIV sensory neuropathy [4]. The study found that when compared to the placebo administered, cannabis was able to stimulate appetite by modulating the endocannabinoid system [4].   The researchers noted that there was a plasma increase of ghrelin, recognizing that to be linked with cannabis consumption [4].

The effects of cancer and forms of treatment can halt an appetite causing more issues for the patient. Cannabis has previously been used to help chemotherapy-associated nausea and vomiting due to antiemetic properties[5].  Cannabis can also help with pain and issues of neuropathy associated with certain cancers as well. The 2015 study points out that cannabis is a useful treatment for patients going through chemotherapy due to phytocannabinoids’ ability to modulate pain, control of movement, and memory [5]. A 2016 study does make mention of a large study of 469 advanced cancer patients “experienced a significantly greater increase in both weight and appetite” [6] 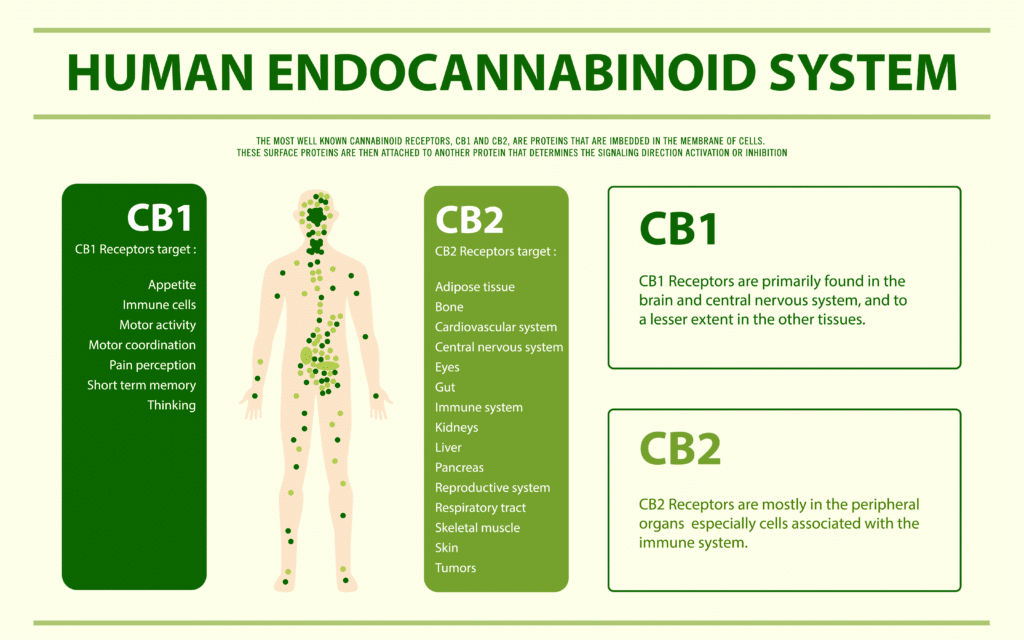 In the research paper The Cannabinoid Receptor Agonist THC Attenuates Weight Loss in a Rodent Model of Activity-Based Anorexia, researchers set out to find if cannabis can be helpful in anorexia nervosa.  Anorexia traditionally happens during adolescence but can occur at any age.

Whether cannabis has been able to provide the ability to get an appetite back due to another underlying condition or causes you to search for chocolate chips in the dead of night, the munchies aren’t going anywhere.